Cranmer Hall – the part of John’s that is home to an eclectic gaggle of people training for Christian ministry – is a community proud of its diversity. We accept those burdened with an enthusiasm for action songs. Non-tea drinkers are allowed a place on the sofa. We even take in folk who think Birmingham is in the north. And for the most part, we manage our differences well.

But ask a seemingly innocent question – “where’s best to live when you’re studying at Cranmer?” – and the gloves really come off. So to save you the trauma of opening this can of worms, I’ve done it for you. Judge the contenders for yourselves, from the words of those who live there – and see if you’re tempted to move in!

Climb up many (many, many) stairs from the Cranmer Common Room and you’ll arrive in the haven that is D floor: if the journey wasn’t enough to burn off your college dinner, it holds great potential for corridor cricket. According to one resident, bedroom windows provide both excellent views of the cathedral and the opportunity for target practice as students from other Bailey colleges pass by. Alarm clocks are superfluous when you live this close to the chapel bell. And if you furnish your room like one ingenious resident, you can charge tourists to step back into 1947. 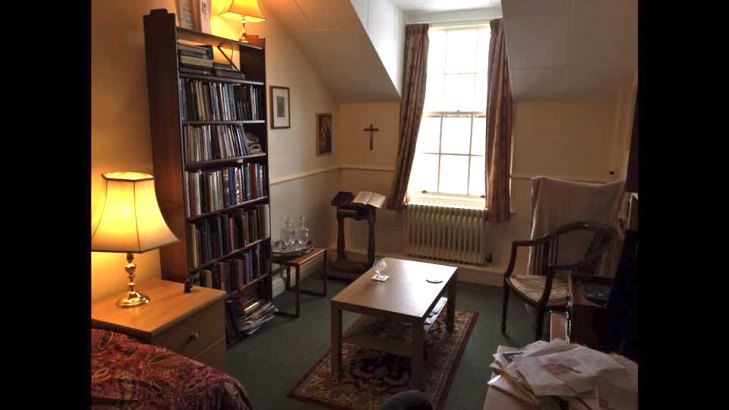 Below in B floor dwell those who can’t remember to bring down all their books in the morning, and like to be within easy reach of their slippers. Creature comforts are catered for with a “spa-like shared shower room”, although it should be noted that sharing showers is not compulsory. With spacious rooms and easy access to emergency exits (particularly helpful for those who “enjoy being alive”), it’s no wonder that one inhabitant insists that “B stands for blessed”.

Just a stone’s throw down the Bailey, number 11 prides itself on its large kitchen table, where “many an essay is formed, many a problem is shared and resolved”. One can only hope that “many a meal devoured” was simply too obvious to say. An oasis for those who want to have their cake and eat it, number 11 provides the best of both living in and living out – and a place of pilgrimage for the truly devout, since residents found the “face of Jesus in the lino in the loo”. No, I can’t see it either.

Once you leave the Bailey, the competition really starts hotting up, as we reach the “clearly superior” Brass Thill. This community within a community offers “spouses, kids and pets”, although it’s usually thought bad form to adopt any brought by someone else. It’s a multisensory experience, with the continuous soundtrack of small children and the smells of the neighbouring care home kitchen – lest you find yourself missing institutional food once you leave the college grounds. And the houses are deemed by residents “sizeable, especially if you haven’t filled them with kids”.

Of course you could head in the other direction,  and get as far as Wearside Drive. The lino is once again an attraction (read into that what you will about Cranmer students), and its 1970s charm is described as “the best ever” by one enthusiastic resident. Although their flooring can’t boast any image of the divine, there is a pink Jesus peppermill, and the rabbit-warren like location is “great for practising complicated parking manoeuvres”. And the possibilities for fun don’t end there: quidditch practice takes place just across the road.

Leaving everyone else behind in the “lower leagues” (otherwise known as, a walkable distance to college) is Gilesgate, described by one convert as “land of large sunny gardens and peaceful evenings uninterrupted by drunken singing”, which seems a harsh way to describe the college choir. Leaving before dawn to get to morning prayer on time affords opportunity “to see the sunrise over the river”. It’s also home to Big Tesco, which is so exciting that the livers-in head there for day trips (“So true… can’t argue” – a number 11 resident). Efficiency is the name of the game as these wild cats like to do their laundry with gin in hand at the Old Cinema Laundrette – and the real adventurers make known that they actually live in Dragonville: “slaying the opposition since the mid-nineteenth century”.